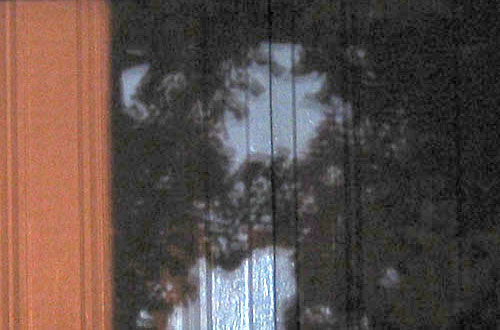 What is this then? Well, to be honest, it’s generally just a way of testing out some photo posting, but it is a damn fine photo. The only photoshopping done was to boost the levels above the seedy bedroom murk that created the phenomena, but would have hidden it in the gamma mire of some computers.

Credit should really go to Ratchet, but I am writing these words and I cropped the thing…and pressed the button that made it show up here…so…

You do indeed see the Jesus, yes? Trailer park cat-ladies in Arkansas might argue, but I think it is truly the finest, most intricate apparition of Jesus. How do you like that? Those coots long for this, probably fixing half of it, and all they get is some horribly misshapen maple syrup stain on their last boyfriend’s underwear. Then there’s me who has no interest whatsoever and was yet haunted nightly by this ornate hippy, disco Jesus…kindly looking over me…but not really making pots of gold or rainbows appear like you’d expect him too.

In reality, it was the clever refraction of heavy moon-light reflected off of the river, through a Ginkgo tree, and cropped by our drapes…the result shining brightly off of our semi-glossed bedroom doors. But that’s certainly not as interesting…is it?

That don’t happen anymore due to neighborhood construction, probably. And although I’m not a big Jesus guy, I do miss some weird afro man looking over me while I sleep. Perhaps in the future…with some of my own careful positioning and construction the neighborhood…I can create the apparition of Ricardo Montelban. It is a known fact that he does indeed leave pots of gold and rainbows.