IT is Just Across the Street 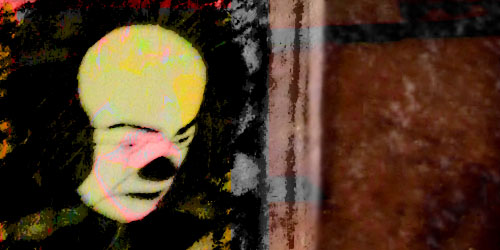 IT is not something I like to think about.

And I try not to, putting IT out of mind and out of sight.

However, when I do happen to see IT and bring myself to think about IT, I feel IT is something I should share.

The building across the street from me, the same floor as my own, has never shown any life within. Nothing but what lies within the windows themselves stir.

For some peculiar reason each window has in it a stained glass image of a sinister clown, one in particular very much like that popularized in the filmed version of Stephen King’s IT.

I have never read the book. I have only seen brief plot-less stills from the film. But I have inferred enough to understand that these designs being so prominently displayed is not a good sign.

I have not been brave enough to actually peer within the apartment with binoculars. I feel safer with a more limited view that coddles an easy ignorance.

What would I see if I did?

What would I see if I did more closely inspect, myself now a character in a more supernatural and uncertain Rear Window.

What would I see?

What would I do?

Would seeing nothing – literally nothing, an endless impenetrable void – relieve my mind of further thoughts on the matter or send it spiraling infinitely through the abyss, forever searching for something that can not be there?

Were I to view some grizzly crime in progress what would I do…what could I do to stop IT?

Gathering fake courage, standing at my window, I peer through binoculars, scanning past the building, into the sky, a closer look at the brick texture of the building itself, that last protective barrier, but not actually daring even a glance at the window itself.

Finally, feeding my mind a lie, by accident my view falls over that most suspect window. Without the innate courage to do so, it must simply be by trance that I find myself adjusting perspective and pulling focus. I can make out a figure through that glass darkly, an impossible mirror image, myself staring back at me, a little older, a little more cruel, eyes searching the same as mine but with a far worse purpose than curing curiosity.

I am behind me.

IT is Just Across the Street.