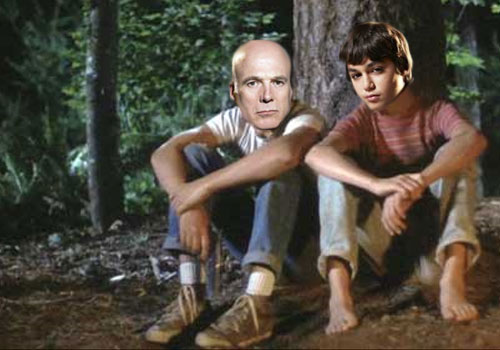 So far through its first season, Caprica, the prequel spin-off of Battlestar Galactica, has proven a very unique and satisfying series. Taking place on a relatively peaceful Caprica, around the same time as the invention of the Cylons, but well before their cataclysmic wars with humanity, the series is filled with so many of its own science fiction food-for-thought and overall compelling human drama that its connection to Battlestar Galactica lies benignly in the background and is not necessary for enjoyment of the current series, providing a sure to come cherry on top of an already fine dessert as the series progresses towards and reveals tantalizing secrets about those already established events.

The successes of the series include the obvious metaphysics surrounding the budding, accidental artificial intelligence of the first Cylon; the mysteries of V-World, an underground virtual reality representation of Caprica, an apparent game whose unknown purpose brings with it the same absurdity and concern as our pursuits in a more accepted reality; and taking science out of its fiction, for a moment, Caprica also provides a great mirror for our own sociological and interpersonal relationships.

The failures of the show are much the same as Battlestar Galactica. The ending of BSG was a blunt clusterfuck of unsatisfying religious impotence, stating the existence of one true God who flutters angels to admonish all his apparent creations for their technological creations, but whom does nothing to effectively stop the process, instead humming the tune to everyone’s favorite song “All This Has Happened Before And Will Happen Again”, resulting in one of the silliest bumper sticker sci-fi moralities I have ever witnessed. I don’t mind religious content in fiction, but I still do not like when it is used for much the same reason it is used in reality, as an all-powerful explanation that can randomly break some rules, but not others and is still pissed off at the results.

The fact that this is the known end of the train tracks, does somewhat spoil Caprica, particularly in that the signature event of the series that splinters into most of its storylines is a train bombing perpetrated by members of STO (Soldiers of the One), a terrorist group that acts on a belief of monotheism who think they are doing God’s work…and apparently are?

However, I do allow myself the possibility of yet being pleasantly surprised and the remainder of the show is of such quality that it detracts from what is still but a minor complaint.

Beyond that, there really isn’t much to complain about except for not seeing one’s favorite characters from Battlestar Galactica on the new series. There may very well be connections and plot points to come that might change grumblings on this rather absurd point, but for now our only direct tie to BSG is young William Adama (Adams), son of Joseph Adama, a lawyer and sometimes criminal central to the plot of Caprica.

While William Adama’s contributions to thusfar toCaprica have been of a cameo quality at best, his mere presence makes you for a moment wish for another spin-off of BSG duplicating the surreality of Jim Henson’s Muppet Babies, obviously titled something to the effect of Cylon Babies.

Although that might be a bit of a stretch, I would gladly sacrifice that desire were it at least possible to introduce in Caprica a new character, the childhood friend of William Adama, Saul Tigh, who somehow already carries a grizzled and grumbling old man head on top of his 13 year-old body requiring a Lois and Clark level of perpetual ignorance of the obvious from all who see and contemplate him.

All this…to justify photoshopping their respective heads rather shoddily onto a screen grab from Stand By Me.

Imagine if you will, a future episode of Caprica that has Joseph Adama working on a case file and arguing “business negotiations” over the phone. In the background, young William Adama along with huckleberry friend and bobbing head doll Saul Tigh are making breakfast before going to school. Their attempts to brown and crisp a piece of bread go horribly wrong as the Graystone Industries brand kitchen device expels the fiery comestible with great velocity at Saul’s right eye. Luckily, in this world all bread has each of its four corners cut off for just such safety concerns. Nonetheless, an enraged and perhaps slightly drunk 13 year-old Saul Tigh, rubs his eye and spits with venom the exclamation, “FRAKKIN’ TOASTER!”

…and I double over in laughter that they actually went to those lengths for that joke.