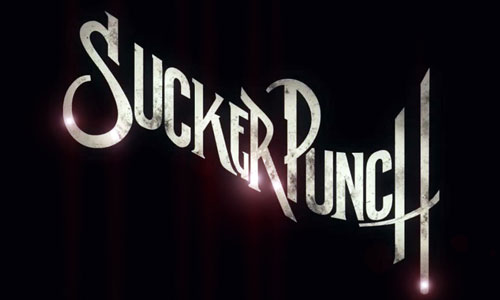 I don’t go to see every movie that comes out, but based on its dazzling trailers and the director’s previous films (300, Watchmen) I had positioned Zack Snyder‘s Sucker Punch as a tentpole movie that wouldn’t fail to explode with all the right blockbuster stimulation on the big screen.

Following the expert flow and framing of Snyder’s lens, the curtains part and the audience is introduced to the character of Baby Doll who, following tragic events is wrongfully committed to an insane asylum by her wicked step-father who arranged with a crooked orderly, Blue Jones, to have her lobotomized so as to wipe out all evidence of his wrong-doing. A doctor at the asylum, Dr. Gorski, attempts therapy with patients working out their issues on stage, gaining power over their imagination and eventually their real world. We are introduced to a fellow inmate, Sweet Pea, who takes center stage and reality is transformed to one where all the inmates work at a stylized strip-club/brothel run by Blue Jones, who is just as devious in this world as the previous. At Baby Doll’s suggestion, the girls begin work on a plan to gain several necessary items and escape their prison, using Baby Doll’s hypnotic dances as distraction to obtain these items. Each dance transports the audeince to a more entertaining representation of events, where the team defeats steam-punk nazis with a fem-mech and slay an enraged dragon mother with a ninja sword. Not all goes exactly as planned, but in the end an escape is made.

My more fevered hopes were for a psycho-sexualized feminist Brazil meets One Flew Over the Cuckoo’s Nest, although I always thought that was perhaps asking too much. I only really expected a quick and dumb narrative as an excuse to be wowed by the machine gun fire of dazzling fight scenes. However, Zack Snyder, apparently not knowing how to induldge himself thoroughly, instead attempts a vague narrative that hopes to distract your mind with commercially complicated layers seeing through which is little more than the act of taking cellophane from a plate of left-overs.

“Before I thought it was only potatoes, but now I see that it is definitely potatoes.”

The entire movie is a collection of several good ideas that conflict and in the end are only lukewarm ghosts of what they could have been. The film fails to embrace the wild ‘fuck it’ abandon need to fully indulge all the visual spectacle that might have come more naturally from the stream-of-consciousness strokes of an artist’s brush, instead being tugged back to trying to make it all make sense in a heavily structured narrative worsened still by a final urge to complicate matters, attempting a awkward puzzle of the story that fails to make it an intellectual game, providing only blunt, damaged, and unsatisfying storytelling.

Conversely, I love David Lynch movies where abandon rules beautifully. While most Lynch films likely have a consensus opinion of the film’s meaning and, of course, Lynch likely has his own feelings on the nature of his mysteries, the question mark carrots littered through his films end in such blurry tangential threads that you can spend a lifetime constructing beautiful alternative dreams.

Given the unsatisfying nature of the obvious plot, I have considered as many alternative interpretations of Sucker Punch as I could think of, but they all tend to fizzle out as the tangents from which they grow are more like blunt broken ends that quickly prove the mystery false.

The adventure scenes have issues as well. While they are expertly done from a technical standpoint, the actual events within are fairly unsurprising and unspectacular. These surreal sequences are also hampered because their occurrence is so predictable, being structurally tied to Baby Doll’s dances which are known events before they even happen.

As Zack Snyder did such an amazing job with both 300 and Watchmen, I suspect he is much better suited applying his visual aesthetic style to existing material rather than conjuring his own stories, and expect him to return to form with his adaptation of Superman: Man of Steel.

Stick to the back issues Zack.