The Declaration of Independents: How Libertarian Politics Can Fix What’s Wrong With America by Nick Gillespie & Matt Welch 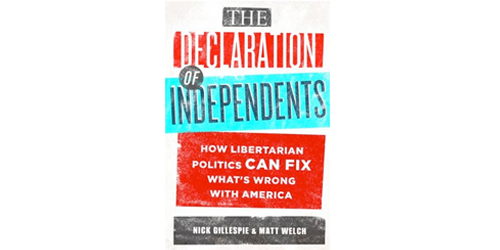 I don’t wanna be a candidate for Vietnam or Watergate…

Luckily, Reason writers Nick Gillespie and Matt Welch – they of the Free Minds, Free Markets persuasion – have co-written a new book which recognizes this preference, celebrating our modern world, one of competing luxuries and increasingly expressive and diverse individuals that have prevailed in spite of the less and less responsive industry that is government.

The Declaration of Independents: How Libertarian Politics Can Fix What’s Wrong With America stresses the importance of life outside of politics while noting and applauding the increasing movement of independent voters that hope to maintain and expand these actions, a book written with such skill, thought, and optimism that it is not only politically inspiring, but also stirs the very passions in life that are worth securing.

The book is to some degree Chicken Soup for the Libertarian Soul – a metaphysical construct that has actually been documented, a semi-transparent mass to be sure, but a bit more grounded than your average specter…with or without the optional top hat and monocle.

While those generally well already persuaded will enjoy the case studies of what has, hasn’t, isn’t, and might work in government, the book aims to reach out to the growing number of self-described independent voters dissatisfied with both the Republican and Democratic parties and more interested in “Pursuing Happiness, Not Politics” as the book’s prologue puts it.

“Here we are, a decade into the twenty-first century, in what used to be known as the future, and we’re as mired as ever in leaden debates between two parties that have about as much governing difference between them as Fidel and Raul Castro.”

“If the only partisans in town are Republicans and Democrats, conservatives and liberals, with all that red ink on their hands, then the time has come not for bipartisanship but postpartisanship.”

The way in which Libertarian Politics Can Fix America is not a dogmatic set of absolutist positions. The authors promote a view of libertarianism that is less a strict definition than a basic tendency or a general trend towards maximizing individual freedoms.

“It’s the belief that the burden of proof should rest not on the individual who wants to sell lemonade, paint his or her house purple, hop on an airplane, ingest intoxicants, or marry someone from the same sex (though preferably not in that order) but on the government seeking to thwart or control such victimless activities.”

“Those general guidelines don’t explain everything, and they certainly don’t mean that there aren’t hard choices to make, but as basic principles, they go a hell of a long way to creating a world that is tolerant, free, prosperous, vibrant, and interesting.”

The first part of “Declaration of Independents” celebrates the rise of we the mutants, exploring such “Case Studies in Making Life Richer, Weirder, And Better” as deregulation of interstate air travel, legalization of home-brewing, the democratization of the Media, and the truly awesome story of how American Rock ‘n’ Roll helped spur the Velvet Revolution in Czechoslovakia.

Given the freedom to do so, people have created more and more particular worlds for themselves and others, helping to make the world a stranger, better, more colorful place.

“When it comes to contemporary America, forget about e plurbis unum – from many, one. Nowadays, where there was one, there are many.”

“[…] social groups and identities – ranging from evangelical Christians to Deadheads to knitting Brooklyn hipsters – create social worlds, replete with stuff to wear, buy, listen to, and read. ‘Let your freak flag fly’ was an expression of the 1960s counterculture, an exhortation to be who you wanted to be. It has become exponentially cheaper to create and fly your freak flag over the decades since the Monterey Pop Festival and Woodstock, and the vanishing number of squares who don’t themselves join in the fun barely raise an eyebrow of disapproval.”

In so many areas of our life, freely competing thoughts and products have benefited everyone by providing new opportunities.