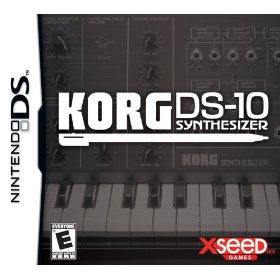 I am a happy monkey. I just got my copy of Korg DS-10 for the Nintendo DS. I’ve been playing with it for about a day. For those who don’t know, Korg DS-10 is, at it’s heart, an emulation of the Korg MS-10 synthesizer in the form of a Nintendo DS game cartridge.

Of course, it is much more than that: in each song session, Korg DS-10 has two fully-editable dual-oscillator analog-style synths and a four-part drum machine, as well as effects that can be applied to one or both synth parts, the drum machine alone or to the mix as a whole. Oh, yeah, and each synth part has a KAOSS pad that allows you to assign parameters to the x and y axis of the touch screen, which you can then play around with in real-time. Weeeeeeeeeeeeeee!

1. It exists. The use of GameBoys (and other video game consoles) for musical applications is not new, but the most versatile programs have always been made by independent/homebrew developers. This is not to say anything negative about indie developers; I am very much in favor of the independent spirit in software and music. However, I also recognize that the independent spirit has to go to work or to class during the day and may not be able to devote its full attention to improving or perfecting music software. This is an officially licensed software instrument, made by people who are being paid to make it and whose first professional priority is making their software as user-friendly, versatile and glitch-free as possible. My hope is that Korg DS-10 sells well and that more companies that make software synthesizers will start making cartridges for the Nintendo DS.

2. The interface. It couldn’t be more intuitive. The main screen in a session, the Map screen, is laid out like a block diagram and clearly shows the signal flow within the session. For each synth voice, you have an edit screen that is laid out like an old-school analog synth, with knobs and switches that affect each parameter. On the patch screen, you make connections by sliding the stylus from one jack to another and can see the connections that you have made. You have a touch-screen-playable keyboard for each synth voice, as well as touch-screen-playable drum pads in the drum section. You can record patterns in real time on the keyboard and drum pads or enter notes individually into the sequencer.

3. The KAOSS pad. It’s just cool. It is the natural thing to do with a touch screen interface and it would have been idiotic for Korg to fail to include it on a release for the DS. Did I mention how cool it is? ‘Cause it’s really, really cool.

4. The sound. I love synthesizers. I love filter sweeps. I love that you can make ANY synth sound like a robot farting. Love it.

Now for the critical part. AQ Interactive, the software developer that made the Korg DS-10, touts it as the “world’s first music tool software created for the Nintendo DS”. This is not true: there are tons of homebrew music applications for the Nintendo DS. Nitrotracker II has been kicking ass for quite some time now. Perhaps it is the first officially licensed, for-sale-in-stores music tool, if you exclude the adorable Electroplankton, which is admittedly more toy than tool.

This post is copyright © 2008 Ratchet and Sporadical Productions, Inc.