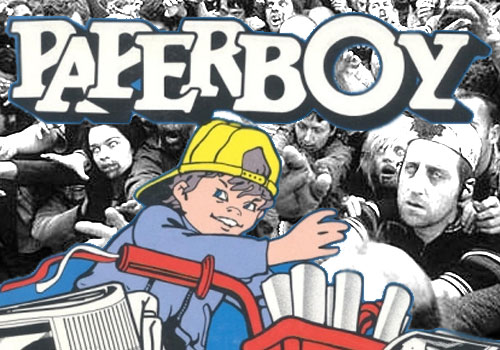 The world to me, most days, seems like the old NES video game, Paperboy – where my attempt to complete any simple task is thwarted by people who are not actual people, but rather moving pixels with only enough crudely constructed artificial intelligence to make themselves an obstacle. RC Cars, some asshole break-dancing, a dog, some crazy lady who is frigtheningly angry only because she is incredibly crazy, tornadoes, and hula hoops out for blood…so many god damn hula hoops.

To be fair, I do not metaphorically consider myself the greatest “Paperboy”. However, it is really stunning the unnatural movements people will make just to prove themselves a formidable obstacle.

People walk down the street arm in arm with every person they’ve every been related to, choking passage sidewalk to sidewalk with their chain of familiarity.

Far too often, I find myself behind some poor soul who’s entered his/her salad years, just stumbling aimlessly down the street, but in a fairly straight line until I try to pass them on the left. They shamble left. I move to the right. They QUICKLY shamble to the right. And on and on. It’s as though their brain has withered away, sputtering its last sparks on only the most basic programming…which appears to be instinctually fucking up someone else’s day.

I once was walking down the streetside of the sidewalk and saw an 8-10 year old kid walking opposite me on the inside of the sidewalk about a block away. I made and kept eye contact with him for the entire distance as, like a zombie, he slowly drifted into my path until he ran directly into me. I pushed him away and he stumbled into a wall. As far as I know, he’s still trying to walk through that wall to this very day.

But what can you do?

I’ll tell you what you can do. Hit them with newspapers…heavy…possibly wet newspapers. They’ll stop right in their tracks. IT WORKS!

Get the big-ass Sunday editions. Just wait until Monday and collect all the unread papers from the Deli since no one really bothers any more with a medium that only nostalgic, fear-mongering academics value.

If you hit enough people and pedal away fast enough from the scene of the crime, you get to play another day. Oh sweet victory…

And yes, when I get home at the end of the day, after completing a dirt track test course – of course – I am welcomed by a bleacher full of poorly rendered fans.