Revenge of Return to Son of Monkey Island 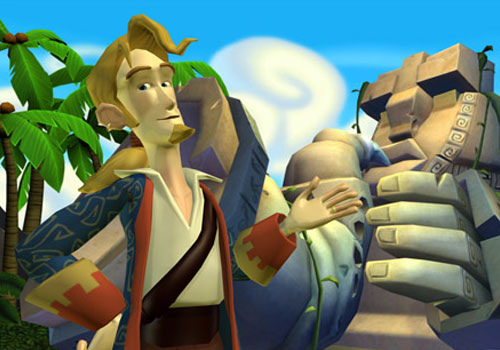 You know…there was a time when my mind wasn’t always the near perfectly functioning abstract steel trap that it is today.

…but that was before I washed ashore Mêlée Island™.

I had dabbled in point and click adventure games in the past, having been uniquely creeped out by Maniac Mansion, unfortunately left without memories by Tim Schafer‘s Full Throttle – one of the few things that almost ran on my computer growing up – and tickled some shade beyond pink by the Eric Idle flavored Discworld.

However, it wasn’t until college when my friend Jack Tripper first introduced me to LucasArts‘ Monkey Island 2: LeChuck’s Revenge that I became obsessed with the genre and the genre simply became Monkey Island.

The series follows forever budding pirate Guybrush Threepwood and his plunder bunny to be, Elaine Marley, battling the force of evil, LeChuck who is sometimes ghost, sometimes zombie, sometimes human, but always and certainly an evil pirate hell-bent on silly plans of voodoo domination that generally disrupt the lives of our protagonist pair.

They are bombarded my absurd predicaments in strange lands surrounded by a surreal supporting cast of characters that titillatingly entertain with actions and advice filled with nonsense and anachronistic pop-culture references.

As Guybrush Threepwood, your job is to borrow everything you can lie your cursor on in hopes that you will be able to strategically stick it, give it, or combine it in some way to better forge the adventure ahead. Sometimes it makes sense. Other times you are left with a chuckling WTF! moment. Most of the time…I go to the walkthrough…because I have the worst patience of anyone alive – I’m trying to get better.

In the years that followed my first introduction to the series, I enjoyed each old and new installment as others enjoy a good book, my heart tingling expectantly as it does with few other franchises.

However, following Escape from Monkey Island for the PC and PS2, a cold breeze of despair and nothingness swept across the series and its genre. Point and click games were popularized during a time of technical prowess where the ability to point and click and have things happen was absolutely fucking amazing. The graphical and mechanic evolutions of video games understandably set expectations of gamers much higher. Given other flashy immediate options, the average gamer doesn’t want to play a good book.

At the same time, questions regarding the future of the franchise directed at LucasArts would normally be answered:

Years passed. Crickets chirped. I collected dust….then sold this amazing dust collection on eBay, but was sadly unable to spend the proceeds on a new Monkey Island game.

However, thanks to the emergence of the casual gaming market, helped along by the Nintendo Wii, and direct download services for the PC, popularized by Valve‘s Steam, the time has ripened quite well for such series to thrive once more.

Enter Telltale Games. The company began by reviving Sam and Max, characters that I am perhaps unfortunately still unfamiliar with, and Wallace and Grommit, two franchises in the point-and-click witty lit genre that had great success with their new serialized adventures.

A thought did not enter my mind – that’s literal statement in fact and you can take it as far you like – until news this summer broke like wildfire out of E3 that Telltale Games was developing the new serialized Tales of Monkey Island.

Before this news had really sunk in, the first chapter, Launch of the Screaming Narwhal, was already upon us.

Originally released exclusively for the PC, I was lucky enough to have one of those space heaters and was able to download it from Steam, paying $34.99 up front for the all 5 installments to be released monthly.

This new tale starts as it should.

Evil is a foot…connected to LeChuck and despite your best efforts you are separated from your plunder bunny once more. In the process, LeChuck is turned human and your right hand turns bad in a time without chainsaws to make it right again. After everything is finished sufficiently exploding, you find yourself washed ashore Flostam Island, an isle of cursed winds making any idea of sailing away futile.