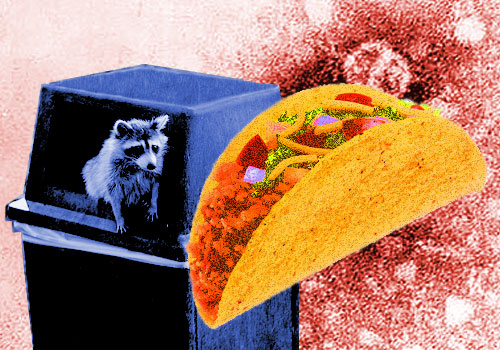 As I tremble in stupid anticipation of my impending epidural, my mind turns to the last time my imagination was traumatized by an impending medical procedure.

When I was around 7 years old, my father and I stopped one night to grab some tacos at Taco Bell. A week or so later, there was a report of someone having contracted one of the many delicious varieties of Hepatitis from that same Taco Bell location. And so, it was decided that we would have to get vaccinated just to be on the safe side.

Someone filled my head with the notion that this vaccination would hurt more than most since it uses a much larger needle. In my head, I pictured all hundred or so people who had happened to have eaten at that Taco Bell during the infectious time period gathered in a large auditorium. From the rafters would be lowered a 200 foot long syringe that would pierce everyone in one thrust, cleansing the community of this horrible plague.

I don’t remember the actual shot, but I’m almost certain it didn’t happen as I thought it would.

I do, however, very much remember directly afterwards being taken to Toy Works to pick out a new video game as a treat for being brave. Even then in possession of excellent taste, I chose Super Mario Bros. 3 for the Nintendo Entertainment System.

The game was so spectacular, that to this day the mere thought of it brings tears of joy to my eyes. It also always reminds me of Taco Bell which reminds me of Hepatitis. But Hepatitis in turn reminds me of Super Mario Bros. 3 which makes me happy.

With Taco Bell and Hepatitis prevention advertisement fairly prevalent, I spend most of my time in a joyful and wholly misinformed coma. It is a very viscious cycle represented by the equation:

Presented with such a premise at the age I was, it followed some course of logic that I began frequenting Taco Bells, twice a week or so, to purchase and consume their delicacies in their restrooms dressed in a magical raccoon outfit stitched together from 6 ex-raccoons, all in the hope that I would either vomit or excrete a new NES video game as had clearly been, more or less, the case previously.

Clearly then, it should come as no surprise to anyone that you will not hear from me until I come to my senses a week or so after my epidural, awaking to find myself amongst the still smoldering ashes of what was a raging Furry party that my medication helped me stumble into, rewarded with what is sure to be something very much like Hepatitis, clutching an NES cartridge emblazoned with officially licensed Portal 2 graphics.