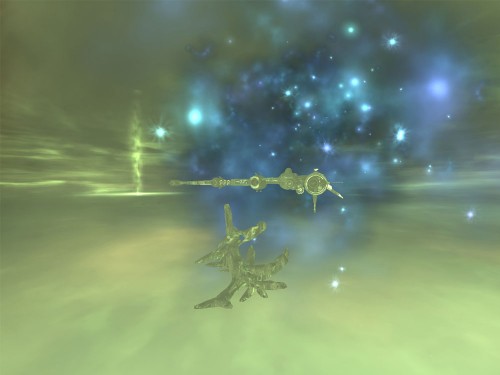 While not intending to turn The Sporadical into an EVE Online blog – it is of course still primarily a Doctor Who blog after all – the MMORPG has fascinated so much to no end that I am compelled to post things of interest to those already addicted and those that may never taste its sweet, sweet sandbox grind.

As mentioned previously, one of the most immediate attractions for newcomers to EVE is its stellar beauty, absolutely fascinatingly detailed ships floating through truly breathtaking space phenomena.

The above is a screen grab of my flying a Gallente Catalyst through some…damn…thing. I was indeed a bit awestruck…and then struck by some missiles as I had forgotten the aim of my enemies. Although not shown in all its glory here, the Catalyst, while a rather weak ship in the scope of the game, is also quite beautiful and I have only recently swallowed the ugly pill and replaced it with a Caldari Cormorant as a salvager.

With its cold, boxy, grey, utilitarian design…could I have named my Cormorant anything other than Thatcher?

Oh…and give isk to Sporadical Productions or The Sporadical. If you want to blow someone up, in that case, my name is Tachoh.

2 Responses to “The Awe of Eve: Toddler’s First Nebula”