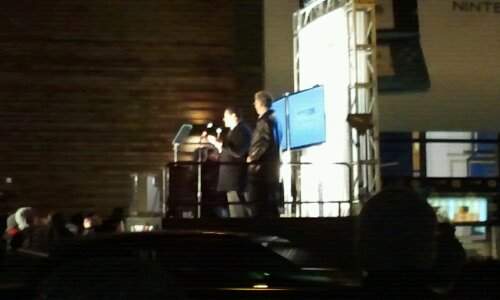 Nintendo spontaneously decides to launch their new stereoscopic 3D handheld video game system, 3DS, so that they had an excuse to close down the Best Buy and deny my very urgent need for its public bathroom.

After mad-dashing through the closing minutes of Whole Foods to reach the last elusive holy public urinal of the waning night, I snapped this picture of Reggie Fils-Aime, Nintendo Pope of North America, wowing bystanders with silly proclamations.

This is a bad picture, indeed, but it actually looked like that if you were there in person. And you got to freeze in the chilly wind, hours on end, all for the chance to be one of the first to own a system that promises to initially wow based on its new interface gimmickry and produce 3 or 4 decent titles before fading into disuse after six months, followed a year later by competitors better adapting the technology with a superior quantity and quality of available titles.

What do I really think about Nintendo’s new product? In the immortal words of Snuff Box‘s Rich Fulcher, “I don’t know whether to puke or piss, but I gotta piss…”

Shigeru Miyamoto can only punch out so many games…no matter how much Reggie cracks the whip.

For more about excretory Nintendo habits…