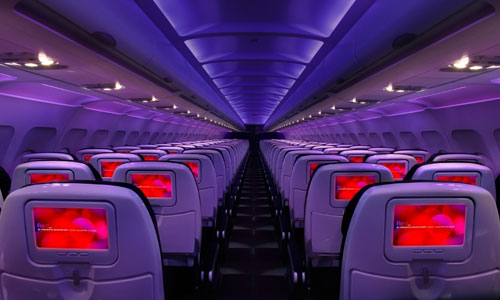 Many thanks to Virgin America for lubing up my nerves prior to my recent trip to Las Vegas. I don’t have much airline experience to compare it to, but Richard Branson has loaded up his Airbus A320s with enough technology and nightclub lighting to distract you from the crazy, crazy undertaking that is air travel.

Now, I AM admittedly a huge, giant pussy about air travel, unable to wrap my lizard brain around the physics. It is really not as bad as I think…which is to view it as not very different from cramming a bunch of people into a big metal container, loading it onto a huge catapult, sending it hurtling through the air to eventually tumble somewhere near some desitination, crossing one’s fingers that when they pry the lid off of it that airport officials will find something other than semi-uniform meat jelly…

Of course, it ain’t really like that. But for someone like me who has taken a total of 3 round trip flights, each separated by some significant time, the slightest turbulence is not easily dismissed, causing me to clench my ass together as tightly as possible as if that were the only thing keeping the plane in the air. What the fuck kind of idea is that?

As I fly more and more I’ll of course become acclimated to the physics…so much so that I will actually develop a “boy who cried wolf” condition where I am very calm before I actually perish in a terrible crash, having suspected nothing amiss.

I will say, however, that even though my nerves were red raw in advance of this flight, they were calmed significantly by Virgin America. The staff, from check-in to flight, was calm and professional while being personable and playful. The cabin itself hit just the right mood with blue and purple lighting, soothing the lizard brain. And in front of me, a touchscreen of so many distractions. Of the free variety, there were some simple video games, radio stations, a collection of mp3s to construct playlists from, 36 channels of DIRECTV (watched Ghostbusters on the first flight), WiFi, LAN/usb/power outlets on each seat, and an interactive map that told you information about your current flight. There was also a chat feature that would allow you to join random chats or chat seat to seat…which I unfortunately did not attempt. In addition to the free stuff, you could also purchase food and drink (coffee, water, soda was free) as well as premium movies and television shows on-demand

On the way back home, having spread out over 3 open seats, watching the Dallas Mavericks put forth a terrible effort against the Oklahoma City Thunder on one screen, tracking my flight and playing mahjong solitaire on another, and pigging out on fruity cracker bits, I had no idea I was hanging 30,000 feet in air in a big metal container…