Zumanity – The Sensual Side of Cirque du Soleil 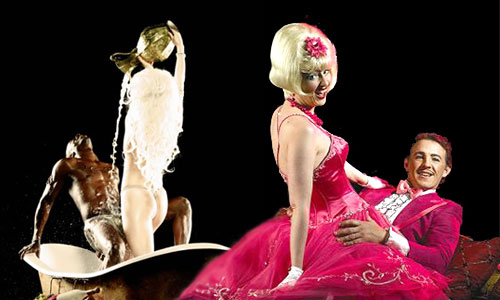 I don’t know pornography when I see it, but I know what I like.

And, however beautiful the human body, I know that I do NOT like the idea of paying some crazy cover fee to sit with handcuffed passions staring at the melting plastic smile of a nude dancer in some moldy temple to sexual frusration.

Perhaps it is not always quite like that, but I do value my entertainment dollar. And so during my recent visit to Las Vegas, I shrugged off the idea of visiting some limp dick seedy industrial strip club, opting instead for the similarly unknown seductions of Cirque du Soleil’s Zumanity which would at least provide some other elegance as entertainment, if filthier titillation failed.

What I got was what I bargained for, the dazzling dreamscape spectacle of circus arts that’s come to be expected from Cirque du Soleil while still serving as a fresh treat mixed with burlesque chaos that only fails to deliver the level of raunch that every other mainstream venue fails.

Zumanity does, however, push the boundaries more than other forms of entertainment, pressing firmly against our boundaries, evident even in the pre-show entertainment as two fully bosomed servants proffering a tray of strawberries, provided so much more, leaving quite an impression on some members of the audience with their plumper parts.

A fashion show with very little clothes and a rooster-boy taunting cock-tease later and the show proper erupts onto the audience. A live band plays above the intimate space at the New York New York Hotel & Casino, as the fauna of Zumanity take the stage led by drag-star Edie, your Mistress of Sensuality, non-chalantly waltzing the audience through a parade of circus acts given new sexual contexts, continually echoing the show’s themes of curiosity, tolerance, and less and less taboo, taboo pleasures.

Edie serves the show well, but the highlight of the night to my mind were the burlesque co-hosts, Dick and Izzy, a delightfully caricatured swinger couple composed of a swarthy frenchman and a dancy, brusk Texan firecracker, who provide absurd, comedic raunch in-between the more elegant and acrobatic performances.

Lights flash, music sounds, and souls sigh throughout, but it is the seemingly more spontaneous pieces of dialogue and audience interaction that makes the experience less like watching National Geographic and more like being lost in the jungle, the audience made to join the animals rather than coldly and clinically observing the actions as something foreign.

During the climax of the show, a rotating display case of sexual sparring, members of the audince were once again called to participate. It’s clear that the intent of the final act is once again to draw nervous laughter from some of the still inhibited in attendance. And they were still to be found. A couple in their 50s were interviewed and cross-examined after each tepid, measured response to the question, “What do you want to do tonight?” until the husband finally gave into Edie what he/she wanted to hear, responding matter-of-factly, “I want to fuck her good.”