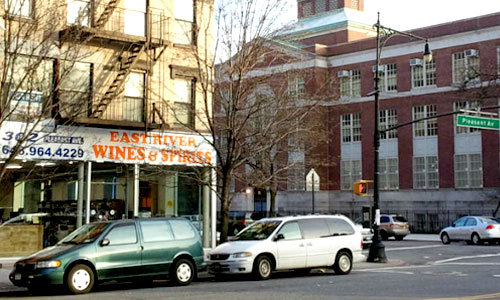 East River Wine and Spirits with insidious, corrupting High School in the background.

A few blocks from where I live, there had been a storefront available for rent on the northeast corner of 116th and Pleasant Ave. For a year or so, I had had consistent fantasies that it would be turned into an Arby’s – delicious, previous Arby’s – or at least a regular pizza place an alternative to the soggy slice sold at Patsy’s.

What opened in its place was East River Wine & Liquor Discount, a nice walk-in wine and spirits shop in the neighborhood. I do not drink much at all, but I do find this a refreshing change from the bullet-proof glass, prison atmosphere of the other local liquor store.

However, I will admit that even I was surprised by its location, situated on a corner of 116th opposite Manhattan Center for Science and Mathematics High School. As I’ll go on to relate in the rest of this article, I don’t really care about its location and don’t see it as a problem, but I did find it amazing that it had somehow escaped the dumb religious reaction of unhinged parents and community leaders forever petrified that anything exist in the world but the sanitized neutered options that are pre-screened for them.

But apparently, their foaming righteousness was only a little slow in rising as this article points out.

Of course, I have to be skeptical of the report. Perhaps there is not really such a swell of local opposition. Perhaps like the Janet Jackson nip-slip, there is only really a minuscule percentage of local residents who oppose it, the opposition only worked into a lather by the media and a few lone lonely souls whose empty lives have been filled by “community leadership” rather than filling one’s house with cats and velvet portraits of the Virgin Mary.

Indeed, the only report I’ve found is from the already linked to DNAinfo.com.

Regardless, some effect has been made as legal matters stemming from the complaints have forced the establishment to be renamed East River Wine and Spirits.

The legal rationale for the opposition is that the area is zoned for non-commercial use only and that an exemption was only made for the previous tenant which was a funeral home.

But think of the kids! What of the rampant illegal underage casket buying and premature burials that curious teenagers are always experimenting with and suffering the horrible consequences of?

The “commercial” concern is very, very weak. On the northwest corner of 116th and Pleasant Ave, for instance, there is a Benjamin Moore shop and Subway shop. Behind the liquor store on 116th is the parking garage for the East River Plaza shops (Best Buy, Target, Costco) that stretches to 118th.

So really, I think the thought process behind the concerns goes something more like, “MY CHILDREN!”

The proximity to the school is the real issue, but in reality it shouldn’t be. The rationale for the fear would have to assume that liquor hungry kids are too lazy to turn one block west and scam the other liquor store at 1st Ave.

Unless the liquor store was actually located in the lunch room or the owners made a practice of kidnapping teenagers, tying them to a chair, and pouring alcohol into their mouths…I think everyone will be OK.

But thanks for shitting your pants, parents…

In general, zoning is a ridiculous idea that we all accept as a part of the normal function of government. There are good argument for zoning when it comes to pollution (environmental and noise), but otherwise I find that the benefits of job creation and increased access to goods and services – and really just the logical upholding of freedom through markets – greatly outweigh the homogeneous aesthetic concerns of the community.

You don’t like liquor stores? Heh, I have the same reaction to places of worship. Perhaps they should be moved to a religious zone. And actually I am personally annoyed by the bland, thoughtless concept of family, the disturbance and violence that children are the cause of, and the very existence of schools. Maybe we should put all the schools in an educational zone?

Or maybe we can all wear helmets and get on with it…?