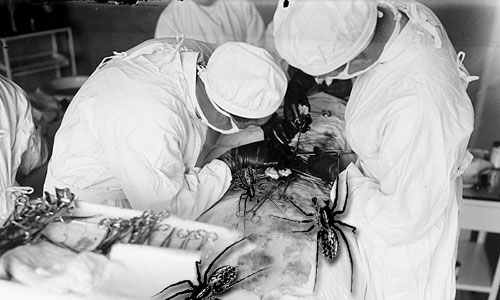 And so, the epic saga of my meandering back pain is nearly at a close with treatment near complete.

In reality, the epidural procedure was no where near as painful or complex as I had schizophrenically imagined. The actual office visit, from entrance to exit, only took about 15 minutes. And the procedure was very simple. I simply walked into a room full of people who told me to loosen my pants and lay face-down on a table, which was a regular feature of morning announcements in High School homeroom, so I fell back into rhythm fairly easily.

The only drama came as the needle neared its final depth and a piercing, high-pitched shriek rang out, not from me, but instead the combined effort of hundreds of baby spiders who then poured out of my wound. I was much relieved following their evacuation, as it seems the pain wasn’t due to a herniated disc, after all but rather the dense impregnation of several arachnid sacs near a very sensitive nerve ending.

I’ll never do THAT again! (Where THAT is whatever caused the spider impregnation…but which certainly WAS NOT in any way related to a recent trip to an occult sex club in Thailand.)

The only side effect I’ve encountered is that I’ve been waking up in the middle of the night to find myself baking cookies in the nude. However, my doctor had informed me prior that this sort of behavior was to be expected, so I’m not too worried.

And I don’t want to question things too much as I’m feeling absolutely fantastic. Or is that just the heroin talking? Or maybe the Queen Spider who stayed behind, taking proper control of all my thought processes, turning me into a simple pawn to carry out a grander plan. Of course, were that the case I likely wouldn’t be revealing that here.