Rubber – Koyaanisqatsi Starring a Tire for No Reason 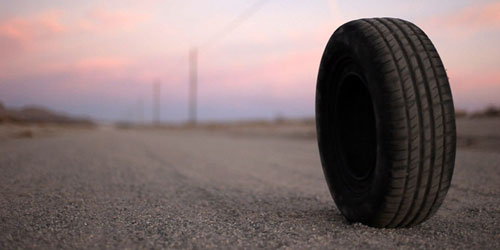 I recently watched the movie RUBBER and absolutely loved it. I wish I could tell you why…

…but I am afraid that in doing so, I might spoil the movie for you.

It is not that there is some radical plot twist or reveal upon which the success of the movie rests. There are simply some scenes that are viewed than written about and all that I might say about the film are my own thoughts filling the craterous, spongy, pastoral voids of the film which would be better left virgin for your own airy daydreaming.

Sifting through Netflix, the ready-made advert for the film stopped me dead in my tracks. A split-second thought did cross my mind that it could be some environmental documentary about how transportation or the manufacturing/disposal of rubber itself was ending the world as we know it. But no, it is quite obvious even simply glancing at the cover image that this is a movie with a central character that is a rubber tire. You are almost required to give a few more minutes of inspection on that discovery, and the accompanying blurb was more than enough to sell me on it.

“Quentin Dupieux directs this inventive twist on low-rent revenge flicks, which follows a car tire named Robert that rolls through the desert Southwest using its strange psychic powers to blow up birds, bunnies, human beings and more. But when Robert spies a gorgeous woman motoring down the highway, he decides to follow her and take a chance on love. This gleefully over-the-top black comedy stars Stephen Spinella and Roxanne Mesquida.”

Didn’t know the tire was named Robert, actually, until I reread that just now. Hmmm…

Anyway, that IS quite a pitch. You might suspect some schlocky, poorly produced bit of self-mocking camp. And there is nothing wrong with that. Watching horrible actors chew the scenery while clearly visible guide wires force a rubber tire to blugeon people to death to the sound creepy midi organ music would actually be a half decent way to kill an hour and a half on some nights.

But RUBBER…is damn good…startlingly good on many levels. The opening 15 minutes, to my admittedly fringe taste, is arguably amongst the best cinema ever.

There are some wonderfully strange things happening and not happening in the movie, a quiet unassuming surrealism that doesn’t draw attention to its stranger implications, silly existential musings that I love all the more because I have no idea if the filmmakers actually had any similar intentions. The beauty of RUBBER is that it doesn’t bother in the slightest to really explain anything and also doesn’t take any time to draw attention to this omission either, leaving enough strangely natural vacant space and time for ridiculous ideas while still more or less chugging along with thoughtlessly easy to watch novelty.

And no matter how you look at the film, it is quite beautiful. Often a novelty movie will be rough around the edges rather on purpose to give it street cred for not trying too hard to make some absurd or campy movie. But with RUBBER, you see a real love for cinema on display, whether because of or in spite of the subject material.

Quentin Dupieux and crew provide just the right composition, photography, and careful yet brave pacing throughout most of the film. Mr. Oizo, Dupieux’s alt record producer/techno musician persona, also provides a fine soundtrack, much because the temptation to blast techno is mostly resisted for better suited sparsely organic/industrial soundscapes.

And the cast certainly does nothing to ruin the fine balance of the film, acting perfectly fine in some rather strange circumstances, further softening the blow of absurdity to some simple new accepted reality. Jack Plotnick plays the Accountant and welcomely strikes you a little bit of Crispin Glover, but settles into his own very well. Stephen Spinella as Lieutenant Chad is the greatest voice for the mind of the film, not a conventional character, but in no way a stunt casting. Very much a perfect balance, I liken his character a very, very understated Paul Lynde…a homeopathic Paul Lynde if you will, so perfectly diluted that it almost contains no percentage of the original ingredient at all and yet you still pretend to feel the effect. Indeed, all the parts are top-notch for most of the film…

Near the end of the film, however, a bit of the polish comes off as the film does eventually make a rather blunt decision on how to – and how not to – resolve itself. Although it didn’t pan out how I had hoped, the greatest joy for me was piecing together my own special ending for the film…which I won’t discuss here, as it would likely help spoil the movie for some out there.

However, if we get the word out and make the film a giant cult hit, a decade or so out I will then write a book of film criticism devoted solely to this title, revealing all my wonderful ideas for the then hungry and fully informed audience.