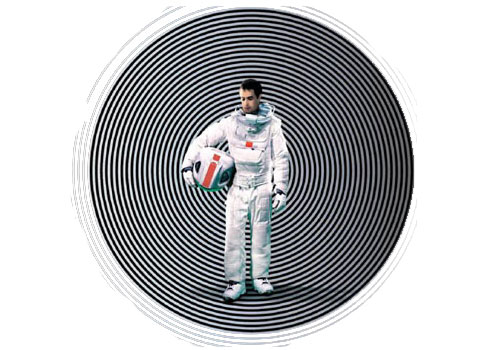 I like Sam Rockwell (Hitchhiker’s Guide to the Galaxy, Confessions of a Dangerous Mind, Choke)…well enough. And, of course, space IS the place. So when my lady friend began hyping up the release of the release of Moon, I was already committed even three weeks until its release.

When my lady friend spoke of her excitement of the casting of Matt Berry in a supporting role, I too shared her excitement and expected a fairly silly and profane romp based on the actor’s previous surrealist comedic work in Garth Marenghi’s Darkplace, The Mighty Boosh, and Snuff Box.

In walking to the theater, I expressed my expectations to my lady friend who quickly broke my soul with a cold cracking glare, apparently… once more…informing me that it was a somewhat frightful and paranoid drama.

My expectations ruined by my own thoughts, I walked into the theater not really sure what I was going to get.

What I got was one of the better film ventures that I have seen in a long time. Although the direction and artistry of the film were great, you tend to focus much more on the objects directly in front of you when viewing the movie and in Moon, Sam Rockwell is somewhere north of 99% of the movie. through many mindsets and moods, Sam Rockwell delivers a dynamic, entertaining and convincing one-man-performance as Sam Bell, a man who has spent close to three years under contract running mining operations on the moon…with only…two…weeks…to…go…

Editor’s Note:
Danny Glover does not appear in this film. But if he did…he would have warned Sam Bell something fierce about those two weeks….

The film is set in a very near future where Earth has overcome the energy crisis by utilizing Helium 3 which provides abundant, cheap and clean energy for humanity. A great benefit for Earth, indeed, but someone still has to do the dirty jobs…in this case managing the refinement of moon rock from which Helium 3 is extracted.

Most of this work requires Sam to work and live in a typically austere space lab, littered here and there with wear and tear and personal effects, the technology just barely high-tech in many cases. One of the higher technologies accompanying Sam is a practical robot pal named GERTY, eerily voiced by Kevin Spacey and acted by emoticons, giving the movie much of its comic and in some surprising instances its dramatic flare.

This general scenario is quite popular, for very good reasons and has played in many other great science fiction tales. And as in those stories, here too the isolation and strange effects of space begin to take their toll on the main character. Sam Bell begins to lose his mind and then suddenly…unexpectedly…

Now…the retards at The New York Times, a newspaper in New York City located in the North East of the United Sates of America, would tell you that they don’t want to get too deep into the plot and spoil the entire movie for you…

…and then, two paragraphs later , they will, without warning, begin printing the all the remainder of the script starting from the most startling and unexpected scene in the movie.