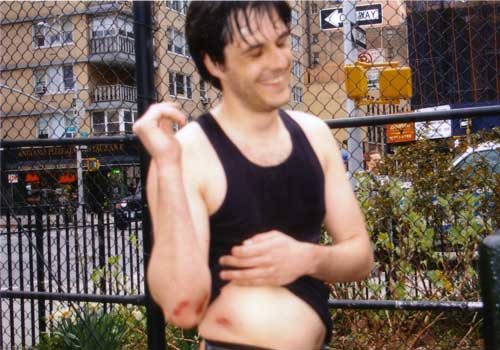 Let’s quickly discuss the above photo. Yes, I have removed large chunks of my meats, once again. Less obvious, though much more problematic than this, I have also destroyed ligaments and bony bits in my right shoulder not unlike the lesser plastic parts in a Sega Genesis controller left to roll around disconcertingly as one painfully ignores their effect on game play. Now removed from my basketball repertoire is the old standard “Running into the ground at full speed, shoulder first and skidding 7 crimson feet”.

All of this aside, the most interesting and unrelated detail of this photo is the mutantly distended lower-left quadrant of my stomach, not caused by the aforementioned basketball play, but rather an eternal pregnancy of what the unborn psychic entities within assure me are very small ponies.

Simply taking a moment to pause…and reflect. I am not regularly reminded of this fact from such a sexy perspective.

But we are here to talk basketball…and I am more specifically here to badmouth New York City, grossly exaggerating my country roots.

It is a commonly known fact that I am the finest basketball talent ever to come from KVille, PA. I have, in fact, never heard any dispute of this. I am FARMBALL. My credibility properly established, you may now more or less blindly accept my comments on the appalling state of streetball as I found it upon moving to New York City.

Much has been said regarding the supposed toughness of New York City basketball, but beyond the hot air, ass-flash trash talk all I hear is a lot of crying.

Pass me the rock? In KVille, we passed the rock. No, literally, passed the FUCKING rock! Dribbling it up and down the grass or cornstalk-stubbed court. Do you know what kind of Popeye forearms and psychokinesis is necessary for that particular feat? Veins and tendons pop from neck to fingertip as a steady streaking of blood streams over your lip from this very physical, mental stress. Don’t speak to me of toughness!

Don’t go pouting about, yammering, “Stop elbowing me in the eye!” Screw you! Stop eyeing up my elbow! Wear goggles or some such thing, skippy. My elbows exist in the world and will at times attempt to occupy the same area of space that you choose to stick your ocular bits in. Am I to perform basketball with T-Rex arms? We are all making tough choices, taking personal risks when we play basketball. Perhaps it is not so smart to fly eyeball first into every fray. Perhaps it is better to run full speed, shoulder first into the ground…skidding a good 7 crimson feet. Keep the opposition guessing.

However, I am man enough to admit my own faults…should they exist. Could my intense displeasure with streetball be due in any part to my own inadequacies? Is it simply a matter of not receiving the proper respect, lacking the necessary commercial appeal or street cred? A new marketing plan may be in order. A new nickname.

Perhaps “Chunky Thunder” is too subtle an allusion to the great Darryl Dawkins and maybe its fuller abstract meaning is lost as the country connotations of superior skill and manliness do not translate through the context of this urban environment.

Should I instead adopt the moniker “The Doctor”? This, not in reference to Julius Erving, but rather a benevolent, endearing time-traveler dragging an absurdly long scarf after him as he traverses the court with a pissy, pompous British sneer on his face.

No, no…I think I have it…surefire: “Dr. Rorshach Von Snugglebees”, a misanthropic, schizophrenic baller wearing an inkblot mask and nothing more, save for black and yellow bee-striped crocheted underwear with a matching crocheted cartoon, puffy bumblebee as a quasi-codpiece. The costume is at least easy to come by. All I need is the inkblot mask.